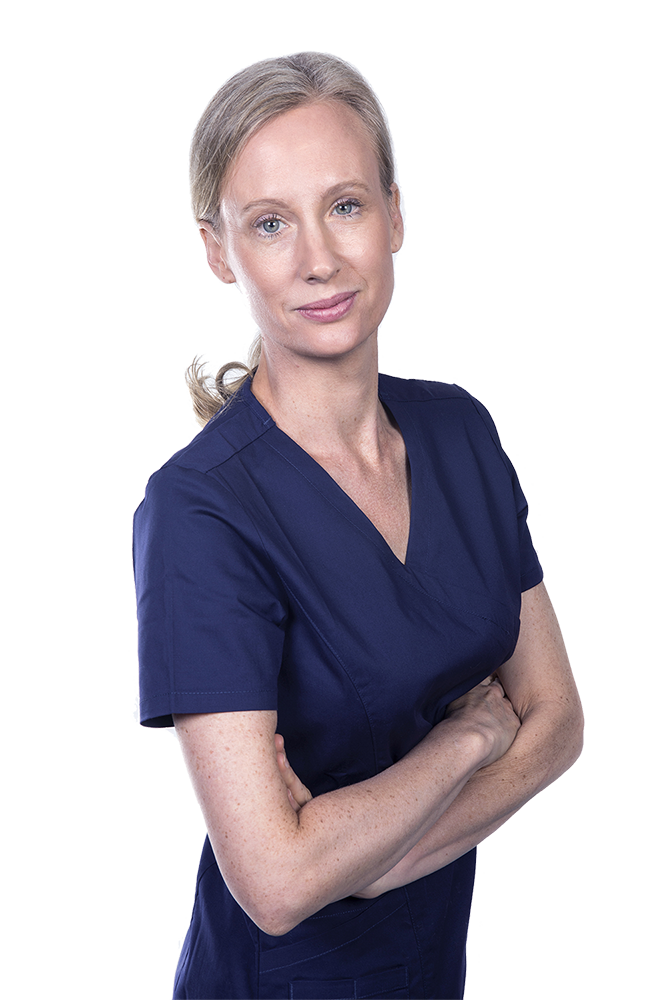 A/Prof Catherine Sinclair is a dual fellowship trained neck and thyroid surgeon and laryngologist. She is dedicated to providing patients with the highest quality care and to assessing patients on an individual basis for surgical or non-surgical treatments when appropriate.

Areas of special interest with respect to neck and thyroid include thyroid nodule surgery and radiofrequency / ethanol ablation, thyroid cancer, and laryngeal nerve monitoring and voice preservation during thyroid and neck surgeries. With regards to laryngology, areas of special interest include vocal fold lesions, professional voice, neurolaryngology and the laryngeal adductor reflex.

Catherine has been performing ultrasounds and biopsies of neck lesions in the office for over a decade, having performed over 3500 biopsies in that time. She discovered and developed a novel continuous neuromonitoring technique for the laryngeal nerves in 2016 and, in 2019, performed the first radiofrequency ablation of a thyroid nodule in New York, setting up the inaugral ablative program at Mount Sinai New York.

Catherine obtained a Bachelor of Biomedical Science from the Monash University followed by a Bachelor of Medicine and Bachelor of Surgery (MBBS) with First Class Honours from Flinders University. She was awarded the Dean’s prize for Medicine, the Staff Prize in Surgery and the AMA medal for South Australia in 2000, when she graduated as Dux of her year. She was subsequently awarded the Gordon-Gordon Taylor Medal in 2004 and the Clinical Committee Prize in 2005 for achieving the highest score in the Basic Surgical Training Exams. In 2010 she became a Fellow of the Royal Australasian College of Surgeons and was awarded a Hugh Johnson Travelling Scholarship to pursue further training in North America.

Catherine completed fellowships in Head and Neck Surgery and Laryngology at the University of Alabama at Birmingham and the New York Center for Voice and Swallowing, respectively.  Between 2012 – 2021 she worked at Mount Sinai in New York as an Associate Professor and the Director of Head and Neck Surgery at Mount Sinai West. In January 2021, she relocated with her family back to Australia, bringing with her two new technologies not yet available in Australia – thyroid nodule radiofrequency ablation and continuous laryngeal adductor reflex neuromonitoring.

Catherine is an active member of many North American Endocrine National Committees including the Executive Committee of the Endocrine Section of the American Head and Neck Society and the Guidelines and Statements Committee of the American Thyroid Association. She has published numerous peer reviewed papers, book chapters and consensus statements on thyroid disease, thyroid cancer, throat cancer, operative techniques during thyroid and parathyroid surgeries the laryngeal adductor reflex and laryngeal disorders. In 2018 she was awarded the prestigious American Laryngological Association Young Faculty/Practitioner Award for research paper entitled “Unearthing a Consistent Bilateral R1 Component of the Laryngeal Adductor Reflex in Awake Humans: A Stride Forward in our Understanding of Laryngeal Pathophysiology”. She is frequently invited to speak at international meetings, conferences and health system Grand Rounds. Research interests include intraoperative neuromonitoring of laryngeal nerves and voice preservation during thyroid and parathyroid surgery, radiofrequency ablation of thyroid nodules, and neurophysiology of the human larynx.